Welcome to 'Make Money Work'.  I've been involved in ethical investment (yes I still like to call it that, despite the somewhat Presbyterian overtones) for over 24 years, firstly as an adviser and latterly as a researcher and developer of portfolio management services.  I'm a passionate believer in the power of money to do 'good' and in socially responsible investment (SRI) as a tool to help make the world a better place.

Over the last 24 years I've seen the blossoming of what was a very small sector of the market to something far more significant and there's no doubting the good things it has achieved - raising corporate standards, financing new environmental technologies and providing a choice for socially motivated investors - but I have serious concerns about the socially responsible investment industry as a whole.  Here's why: 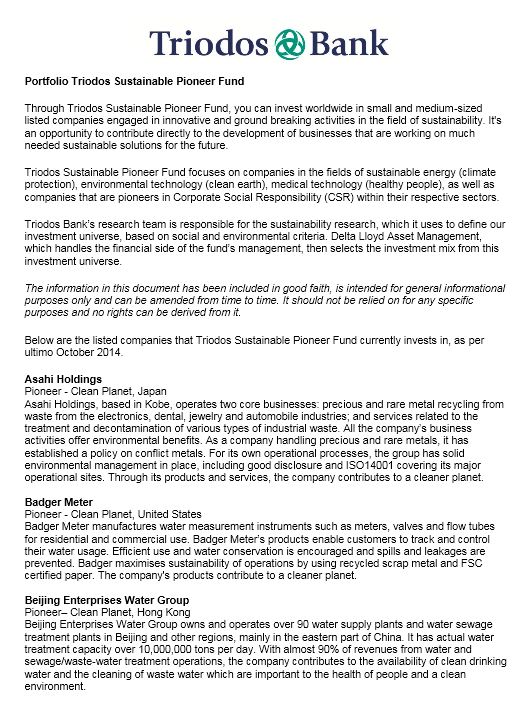 Lack of Transparency
Transparency is at the very heart of ethical investment.  Typically, ethical funds only list their top ten holdings as a matter of course and simple naming of companies won't mean very much to the average investor.  Furthermore, funds tend to profile companies with positive attributes but say little about more controversial holdings.  This isn't good enough.  Socially motivated investors would benefit from an ethical rationale for each and every holding, not just a select few.  Claims of the need for commercial confidentiality just don't stack up - a select few funds do this, so why not the rest?  And where potential areas of concern exist, investors need to be made aware of them so that they can make informed judgements as to social suitability.

" Why can't all companies tell us something about each and every company in which they are invested?"


Lack of Impact
Ethical or socially responsible investment is often reduced to maximising investment returns from a prescribed universe of ethically screened stocks or funds.  Despite having an ethical badge, this usually does little to make a social impact, since the proportion of the fund held in companies that make a clear social impact is usually low.  The stated positive criteria in non-thematic funds are little more than aspirational ideals, but having positive criteria makes it look as though the fund is actively invested in a positive manner when, in reality, only a very small percentage is invested in that way.  Stating the actual percentages invested in social and environmental solutions and describing each and every holding would go a long way to making the social impact clear and to highlighting those funds that actually make a social impact.

Short-termism
The average holding period of equities is measured in months rather than years.  This makes ‘investing’ more like a trade than a true investment.  There is no social value to this.   Clearly, there is a need to change investments if the fundamental view on a stock has changed, but portfolios with high turnovers are indicative of trading which is purely dictated by financial considerations.  Many ethical portfolios seem little different from their conventional counterparts in this respect and this sits uneasily with the concept of investing to make a social difference.


Ethical Compromise
Despite having clearly defined ethical criteria, many, if not most ethical funds, seem to make major compromises that, if investors were aware of them, would very likely cause concern.  This demonstrates the problem of comparing funds based on criteria rather than content, which allows stocks that fit the criteria to be included even though they raise significant ethical issues.  Furthermore, sustainability funds justify selection based on their consideration of a company's sustainability profile.  Some of their conclusions are surprising to say the least.  How does Monsanto justify inclusion in a sustainable portfolio when it has run roughshod over farmers, citizens and countries, to the extent that online campaigning group is presenting the company with a prize for being 'the most evil company in the world'.

Or how does Amazon get to be in a leading ethical fund when aggressive tax avoidance is a key part of its business model, and it stands accused of very poor employment practice?  I believe that investments like these undermine ethical investment and have no place in it.  If investors are to trust their investment manager, they need to be confident in the process and this means absolute transparency and a clear determination to minimise the ethical compromises being made.

After 24 years of researching and advising on ethical investments I have come to the conclusion that the existing portfolio management services are largely failing socially motivated investors who want to make a social difference with their money.  As a result I am attempting to help advisors and managers to develop and run services that better meet the aspirations and needs of these investors.  I'm calling it 3D Investing and I'll talk about it in my next blog entry.